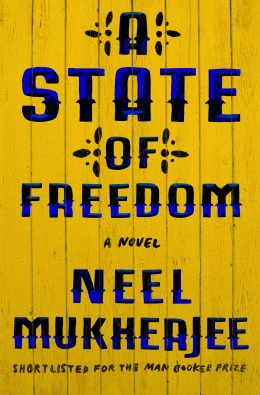 Here’s a podcast featuring me talking about A State of Freedom.

A State of Freedom

“Stunning … It’s a brutal novel that gets darker and darker, and it’s as breathtakingly beautiful as it is bleak. … A State of Freedom is a marvel of a book, shocking and beautiful, and it proves that Mukherjee is one of the most original and talented authors working today.” Michael Schaub, NPR.

“… exquisitely written, cleverly structured, powerfully resonant to the very final line … Mr. Mukherjee has created something deeply memorable … The result is a profoundly intelligent and empathetic novel of privilege and poverty, advancement and entrapment. Mr. Mukherjee constantly makes us grapple with our understanding of free will and self-determination, the contingency of worldview in a seething and populous country that offers great opportunity and far greater desperation. A State of Freedom is always moving, sometimes horrifying, never gratuitous.” Toby Lichtig, Wall Street Journal.

“A State of Freedom” requires those of us who live comfortably to imagine a world in which almost no one ever does … it’s a mark of Neel Mukherjee’s range and force and ambition that any lesser comparison [to an author other than Naipaul] would seem an injustice.” Michael Gorra, New York Times.

“Neel Mukherjee has a genius for storytelling. In his new novel, A State of Freedom, the narration is deceptively simple, transporting the reader to unexpected and wondrous places. … Mukherjee is a writer of abundant gifts. His descriptions are mostly spare and without artifice, but he can also deliver lustrous prose … The reader is so thoroughly entranced by the telling of the tales. It’s an experience I won’t soon forget.” David Takami, Seattle Times.

“Mukherjee looks straight at the ugliest parts of an unequal society and uses what he finds to construct something beautiful.” Harper’s.

“The London-based Mukherjee surprises once again with the form of his storytelling while confirming anew the depth of his empathy. His characters’ life journeys are often painful while his descriptions of their circumstances are unsentimental, vivid, unsparing. Above all there is compassion here, alongside a focus that depicts gross inequities with a grim tenderness. A calm, compelling, unshrinking portrait of humanity in transition; both disturbing and dazzling.” Kirkus (starred).

“Seen against a pitiless landscape of primitive villages and hellish urban slums, and the extremes of scorching heat and billowing monsoon rain, this is a compassionate, deeply felt tribute to India’s forgotten people who strive to triumph over subjugation. With its mixture of prose styles and narrative voices, Mukherjee’s novel is a literary achievement.” Publishers Weekly (starred).

“Mukherjee’s formal experiment leads to something not so far from the collections of linked stories we’ve seen recently from Elizabeth Strout (Anything Is Possible) and Joan Silber (Improvement). It is a form uniquely suited to depicting the operation of fate and coincidence, and to showing relationships and characters from a variety of angles. Mukherjee’s version is unsparing in revealing just how far from free we are.” Marion Winik, Newsday.

“Mukherjee’s achievement is in sustaining his characters, adrift in realms of stark disparity, in a style that is buoyant and effervescent. He is not daunted by the dereliction of his landscape. Out of his own turbulent encounter with the home country after living for decades in the United Kingdom, he forges sentences of distinct, crystalline beauty. … A book as incandescent and heartfelt as A State of Freedom is to be read and reckoned with against [the] bleak backdrop [of contemporary India]. Mukherjee calls upon one corroded nation’s capacity for introspection, to cast a few visceral glances at the millions of lives battered daily.” Feroz Rather, The Millions.

“A writer who can envelop you in the worlds he creates, and whose piercing eye for detail can send you reeling … He seeds his tales with images of unexpected beauty … an extraordinary account of the tenacious will to survive.” The Times (London).

“A meticulous, unhurried observation of the minutiae of everyday existence, and of the undercurrents of darker meaning that move beneath those surfaces. … Dostoevsky-like in its juxtaposition of unbearable cruelty with an equally unbearable yearning for security and love. … Combined with Mukherjee’s rich realisation of the novel’s individual elements, this indeterminacy makes A State of Freedom a powerful, memorable treatment of a theme too often reduced to uninvolving didacticism.” Adam Lively, Sunday Times.

“His best work yet. … This bleak and entirely justified vision of modern India is what binds together Mukherjee’s stories and indeed his oeuvre. In an arid landscape so inimical to the hopes and dreams of the majority, even those who fight to improve their lives will fail.” Sonia Faleiro, Financial Times.

“Mukherjee… homes in on the restless, the disinherited, the socially trapped… Mercilessly observant, he does not spare the reader but leavens scenes of savagery, squalor and despair with moments of rainbow vividness, all the more striking for the muddy, cacophonous backdrop from which they are brought forth… In a significant and porous work, Mukherjee gives congruence and visibility to these fractured, hidden lives.” Catherine Taylor, New Statesman.

“Neel Mukherjee’s fiction about class is as good as Jane Austen’s was 200 years ago. … He does what good novelists should, which is to hold up a mirror to society and remind people that what passes for normal is often barbaric. His quiet observation is effective – and damning.” The Economist.

“Mukherjee isn’t a polemicist, although there is plenty to be polemical about. His world is textured and complex. … Each story is intimate and universal, concrete and elusive… A State of Freedom is ambitious, and it succeeds on all levels. … Mukherjee strikes at the centre of things by engaging with the periphery.” Eoin McNamee, Irish Times.

“Narrated with the precise realism that we have come to expect of Neel Mukherjee’s novels… A State of Freedom resonates with intricate and disturbing echoes… Mukherjee has created an India that is always graspable and always elusive.” Tabish Khair, Times Literary Supplement.

“A brilliant novel, deeply compassionate and painterly, reminding me of Howard Hodgkin’s paintings. Mukherjee brings to life the colours and sounds of a place where modern life is constantly crashing against tradition.” A.M. Homes, The Observer.

“Mukherjee’s characters are so well drawn and their plights so affecting that we stop quibbling over how to categorise the book [as collection of short stories or novel] and simply lose ourselves in masterful storytelling … Random bouts of cruelty … unfold in electrifying prose.” Malcolm Forbes, Herald.

“A thing of wonder … does what a great novel should do … one of the most wonderful novels I’ve read for ages and ages … such wonderful high calibre writing”. Deborah Moggach, Saturday Review, BBC Radio 4.

“Brilliant … I couldn’t put it down … everything about it rang true … so gripping, so thrilling”. Kate Williams, Saturday Review, BBC Radio 4.

“The beauty of Mukherjee’s prose sucks the reader into an alternative world, where misery, deprivation and the struggle to exist another day are normal.” John Harding, Daily Mail.